153.There are three types of database anomalies:

The same information can be expressed on multiple rows; therefore updates to the relation may result in logical inconsistencies. For example, each record in an “Employees’ Skills” relation might contain an Employee ID, Employee Address, and Skill; thus a change of address for a particular employee may need to be applied to multiple records (one for each skill). If the update is only partially successful – the employee’s address is updated on some records but not others – then the relation is left in an inconsistent state. Specifically, the relation provides conflicting answers to the question of what this particular employee’s address is. This phenomenon is known as an update anomaly.

There are circumstances in which certain facts cannot be recorded at all. For example, each record in a “Faculty and Their Courses” relation might contain a Faculty ID, Faculty Name, Faculty Hire Date, and Course Code. Therefore, we can record the details of any faculty member who teaches at least one course, but we cannot record a newly hired faculty member who has not yet been assigned to teach any courses, except by setting the Course Code to null. This phenomenon is known as an insertion anomaly.

Under certain circumstances, deletion of data representing certain facts necessitates deletion of data representing completely different facts. The “Faculty and Their Courses” relation described in the previous example suffers from this type of anomaly, for if a faculty member temporarily ceases to be assigned to any courses, we must delete the last of the records on which that faculty member appears, effectively also deleting the faculty member, unless we set the Course Code to null. This phenomenon is known as a deletion anomaly.

154.What is database normalization?

Database Normalization is nothing but technique of designing the database in structured way to reduce redundancy and improve data integrity.

155.What are different check points for normalizing data?

There are following checkpoints to normalize the data :

156.Why Denormalization is promoted in Universe Designing?
157.What is Normalization, First Normal Form, Second Normal Form ,Third Normal Form?
Normalization is process for assigning attributes to entities
Normalization is the analysis of functional dependency between attributes /data items of user views,It reduces a complex user view to a set of small and stable subgroups of fields / relations
INF:
Repeating groups must be eliminated,
Dependencies can be identified,
All key attributes defined,
No repeating groups in table
2NF:
The Table is already in INF
Includes no partial dependencies–
No attribute dependent on a portion of primary key,
Still possible to exhibit transitive dependency,Attributes may be functionally dependent on non-key attributes
3NF:
The Table is already in 2NF,
Contains no transitive dependencies. 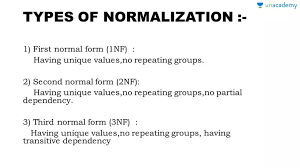 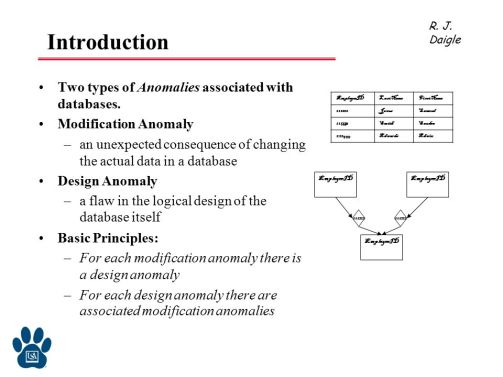 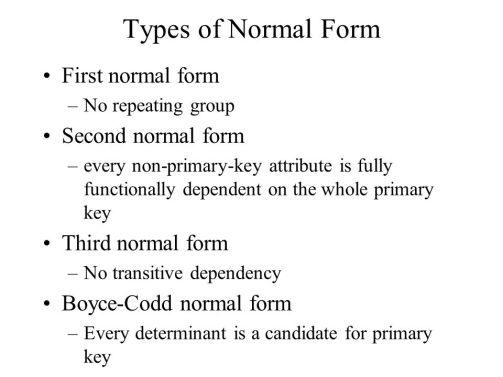 158.Is this statement TRUE or FALSE? all databases must be in third normal form?

In general all organization data bases are normalised to 3nf in order to remove redundancy and efficient access.A database can also be created without normalisation.Hence it is not a mandatory that a database should be in 3nf.

159.When should you consider denormalization?

Denormalization is used when there is a lot of tables involved in retrieving data. Denormalization is done in dimensional modelling used to construct a data warehouse. This is not usually done for databases of transactional systems.

What is first normal form ? Explain with example.

1.It contains only automic values.

Atomic values:- The Single cell have only single value

2.Each Record needs to be unique and there are no repeating groups.

Consider following table which is not normalized:

To bring it in to first normal form We need to split table into 2 tables.

We have divided the table into two different tables and the column of each table is holding the automic values and duplicates also removed.

What is second normal form?

An entity is in the second normal form if all of its attributes depend on the whole (primary) key. In relational terms, every column in a table must be functionally dependent on the whole primary key of that table. Functional dependency indicates that a link exists between the values in two different columns.

The data is said to be in second normalized form If,

1.It is in First normal form

Let us consider following table which is in first normal form:

Now we have simplified the table in to second normal form where each entity of table is functionally dependent on primary key.

What is third normal form?

The database is in Third normal form if it satisfies following conditions:

1.It is in Second normal form

2.There is no transitive functional dependency

For That we will Split tables into following 2 tables:

1.Amount of data duplication is removed because transitive dependency is removed in third normal form.

Third normal form and BCNF are not same if following conditions are true:

1.The table has 2 or more candidate keys

2.At least two of candidate keys are composed of more than 1 attribute

3.The keys are not disjoint.

No non key attribute hence this example is of 3 NF.

There is dependency between attributes belonging to key.Hence this is BCNF.