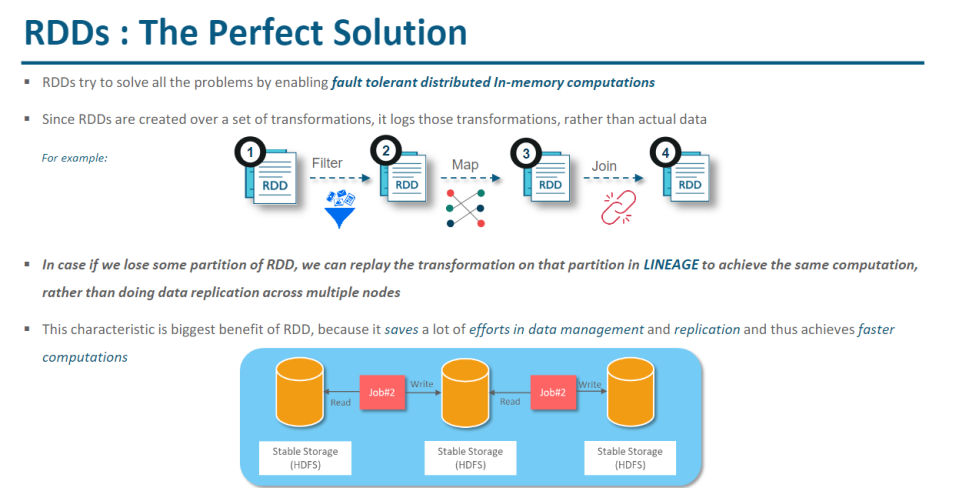 . It is a representation of data located on a network which is

There are primarily two types of RDD:

As the major logical data units in Apache Spark, RDD possesses a distributed collection of data. It is a read-only data structure and you cannot change the original format but it can always be transformed into a different form with the changes. The two operations which are supported by RDD are – 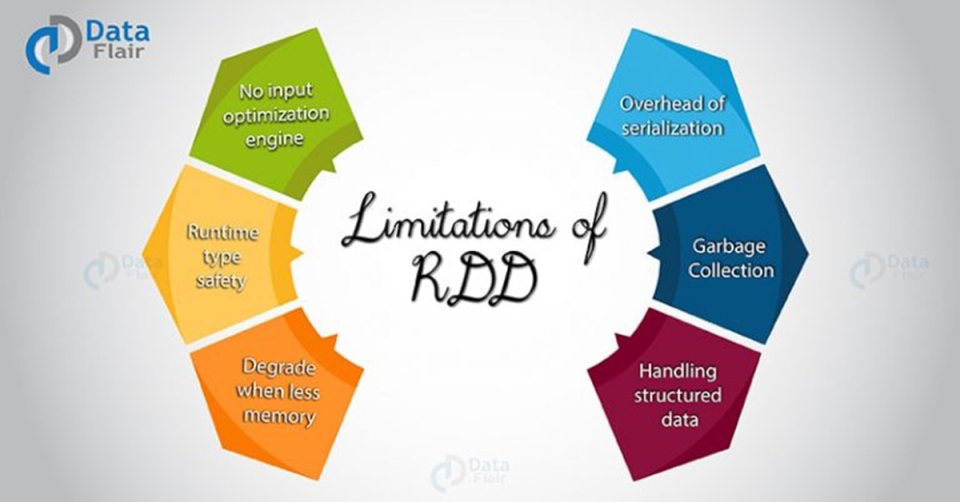 You can create an RDD from an in-memory data or from a data source such as HDFS.

You can load the data from memory using parallelize method of Spark Context in the following manner, in python:

Here myrdd is the variable that represents an RDD created out of an in-memory object. “sc” is the sparkContext which is readily available if you are running in interactive mode using PySpark. Otherwise, you will have to import the SparkContext and initialize.

And to create RDD from a file in HDFS, use the following:

This would create linesrdd by loading a file from HDFS. Please note that this will work only if your Spark is running on top of Yarn. In case, you want to load the data from external HDFS cluster, you might have to specify the protocol and name node:

In the similar fashion, you can load data from third-party systems.

How to create RDD?

RDDs are of two types:

There are two ways of creating an RDD in Apache Spark: 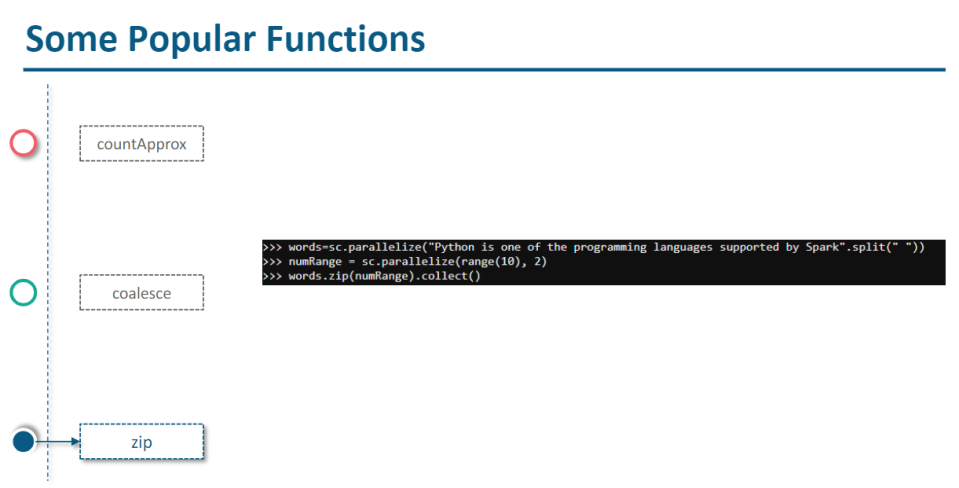 68.What do you understand by Pair RDD? 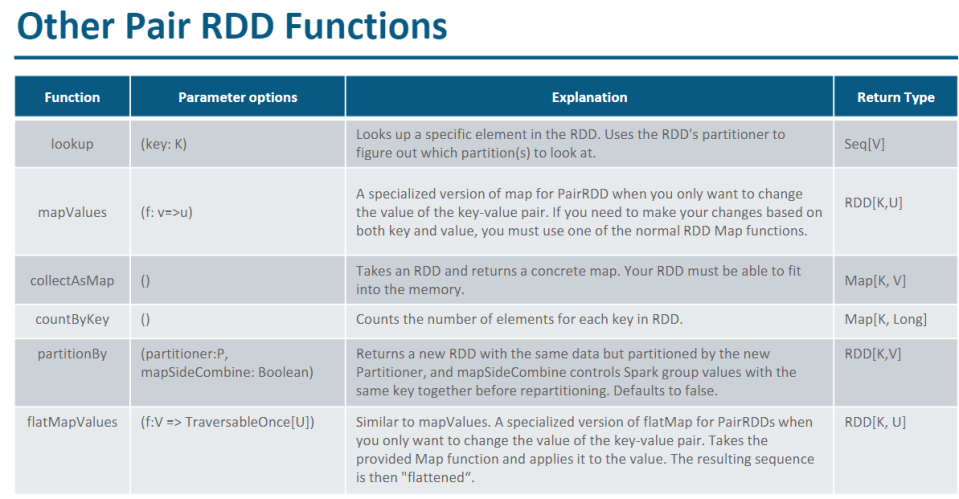 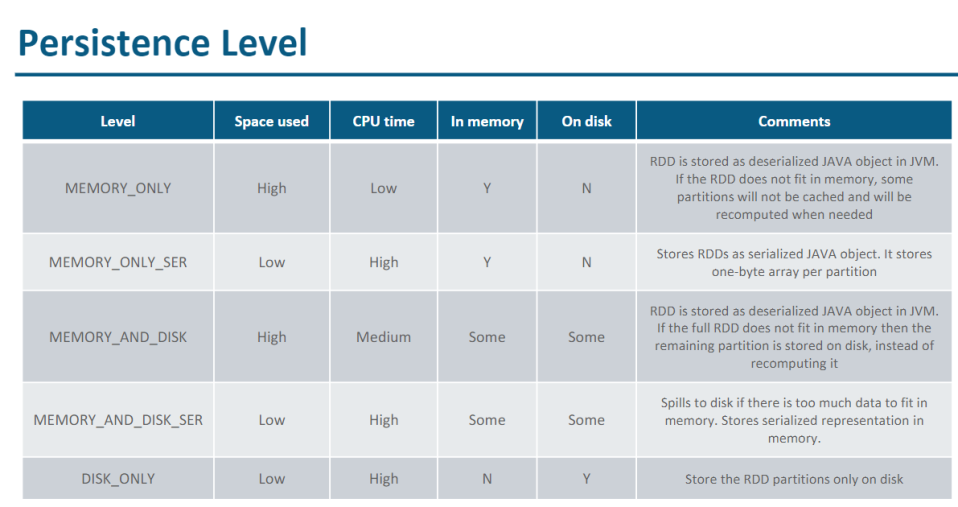 59.What do you know about RDD Persistence?

61. What do you mean by the default storage level: MEMORY_ONLY?

69.How RDD persist the data?

What are the various levels of persistence in Apache Spark?

There are two methods to persist the data, such as

cache()to persist temporarily in the memory.

Different storage level options there such as

Both persist() and cache() uses different options depends on the task.

Apache Spark automatically persists the intermediary data from various shuffle operations, however it is often suggested that users call persist () method on the RDD in case they plan to reuse it.Spark has various persistence levels to store the RDDs on disk or in memory or as a combination of both with different replication levels.

The various storage/persistence levels in Spark are –

Although the intermediary data from different shuffle operations automatically persists in Spark, it is recommended to use the persist () method on the RDD if the data is to be reused.

60.What is the difference between cache() and persist() for an RDD?

62. If there is certain data that we want to use again and again in different transformations, what should improve the performance?

How RDD hang on the data?

There are two strategies to bear the data, for instance, hang on() to drive forward forever and hold() to proceed quickly in the memory. Unmistakable limit level decisions there, for instance, MEMORY_ONLY, MEMORY_AND_DISK, DISK_ONLY and some more. Both endure() and hold() uses assorted choices depends upon the task. 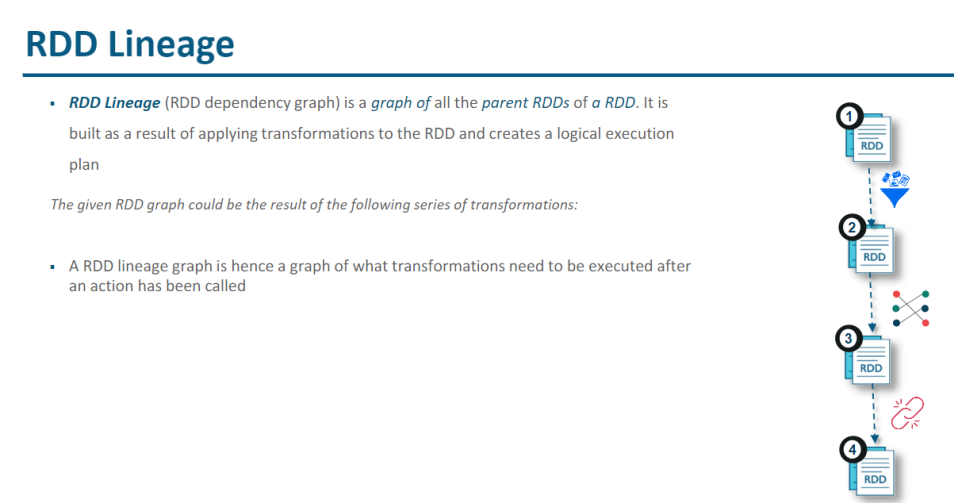 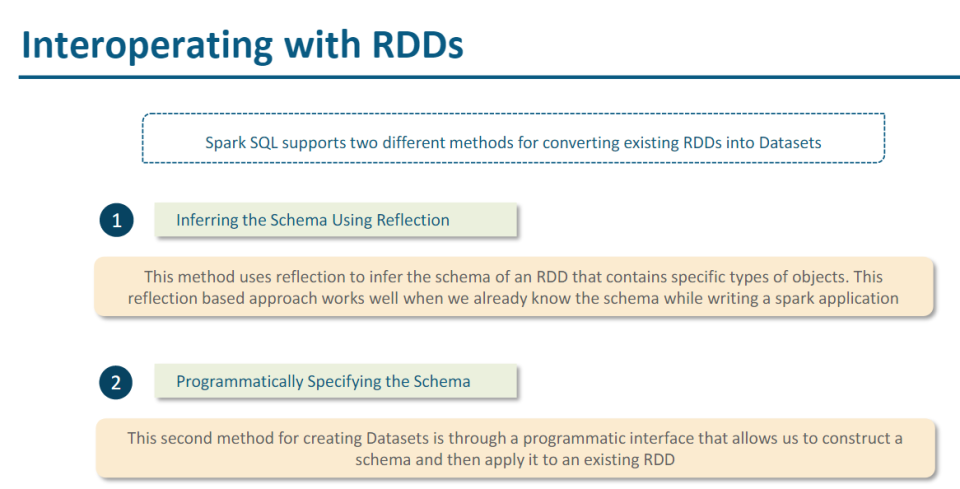 What is DAG and Stage in spark processing?

FYI the above program, the overall execution plan is as per the DAG scheduler.

For each and every method execution is optimized as per the stages.

63. What happens to RDD when one of the nodes on which it is distributed goes down?

65. When we create an RDD, does it bring the data and load it into the memory?

There are few methods provided by Spark:

67.What do you understand by SchemaRDD?

70.How would you determine the quantity of parcels while making a RDD? What are the capacities?

What is the contrast between RDD , DataFrame and DataSets?

how to join two dataframes in spark?