1. What are the performance considerations when working with Aggregator Transformation?

2. What differs when we choose Sorted Input for Aggregator Transformation?

But when we check Sorted Input the Integration Service uses memory to process an Aggregator transformation it does not use cache files.

3. Under what conditions selecting Sorted Input in aggregator will still not boost session performance?

4.Sorted input for aggregator transformation will improve performance of mapping. However, if sorted input is used for nested aggregate expression or incremental aggregation,then the mapping may result in session failure. Explain why?

5.Under what conditions selecting Sorted Input in aggregator will still not boost session performance ?

6. What are the transformations that use cache for performance?

7. How many ways we can filter records?

10. Differentiate between joiner and Lookup Transformation.

Below are the differences between lookup and joiner transformation:

11. State the limitations where we cannot use Joiner in the mapping pipeline.

12. Out of the two input pipelines of a joiner, which one will we set as the master pipeline?

13. What are the transformations that cannot be placed between the sort origin and the Joiner transformation so that we do not lose the input sort order?

14. What is the use of sorted input in joiner transformation?

15.When do you use SQL override in a lookup transformation?

You should override the lookup query in the following circumstances:

17. What are the differences between Connected and Unconnected Lookup

So it can be said that an unconnected lookup can be called multiple times in mapping..

Unconnected Lookup does not take the data input from another transformation but it can be used as a function in any transformation using LKP(LookUp) Expression. It uses the only static cache.

19.Explain the features of Connected and Unconnected lookup.

The features of Connected Lookup can be explained as follows:

The features of unconnected lookup can be explained as follows:

20. What are the different lookup cache(s)? 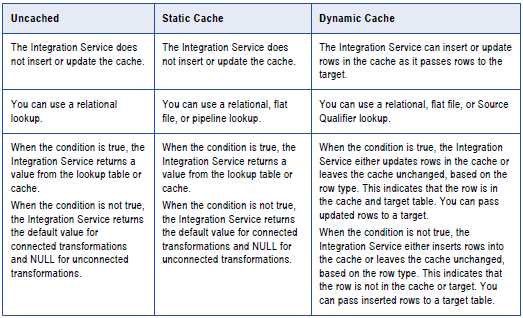 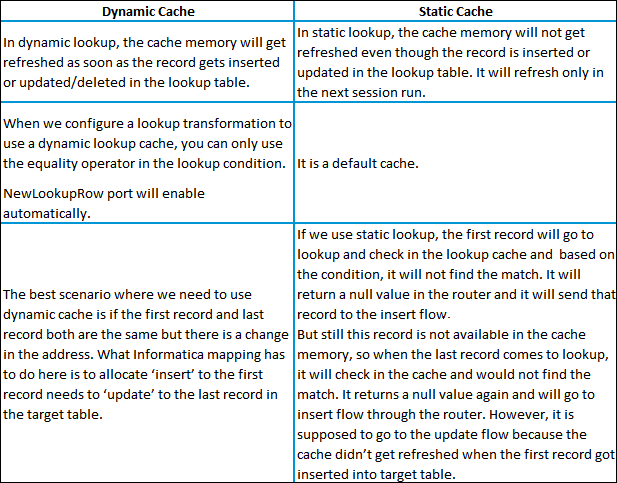 Based on the configurations done at lookup transformation/Session Property level

By default, the Lookup caches are deleted post successful completion of the respective sessions but, we can configure to preserve the caches, to reuse it next time.

21. What is the difference between Static and Dynamic Lookup Cache?

22. What is Persistent Lookup Cache?

If the cache generated for a Lookup needs to be preserved for subsequent use then persistent cache is used. It will not delete the index and data files. It is useful only if the lookup table remains constant. Lookups are cached by default in Informatica. Lookup cache can be either non-persistent or persistent. The Integration Service saves or deletes lookup cache files after a successful session run based on, whether the Lookup cache is checked as persistent or not.

23. What type of join does Lookup support?

With the unconnected lookup, we get the performance benefit of not caching the same data multiple times.
Also it is a good coding practice.

25.What is the difference between persistent cache and shared cache?

Persistent cache is a type of Informatica lookup cache in which the cache file is stored in disk. We can configure the session to re-cache if necessary. It will be used only if we are sure that lookup table will not change between sessions.
It will be used if your mapping uses any static tables as lookup mostly.

26.What is the difference between the two update properties – update else insert, insert else update in dynamic lookup cache?

27.How can we ensure data is not duplicated in the target when the source has duplicate records, using lookup transformation?

28. What is the difference between Joiner and Lookup. Performance wise which one is better to use.

29.State the differences between SQL Override and Lookup Override?

30.What are the different transformations where you can use a SQL override?